Democrats Should Welcome Michael Bloomberg Into the Primary Race

Robert Brent Toplin has published eleven books and more than a hundred articles. He was a professor at Denison University and the University of North Carolina, Wilmington. Since retirement, he has taught occasional courses at the University of Virginia. 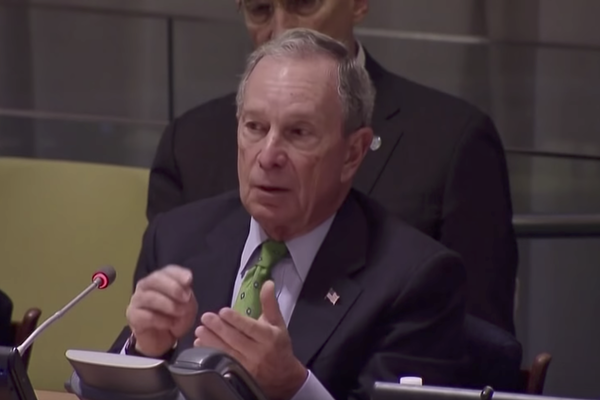 Soon after Michael Bloomberg filed for the presidential primary in Alabama, politicos rushed to criticize the former mayor of New York City. They berated Bloomberg for trying to enter the presidential race without doing the hard work that long engaged other Democratic candidates. Some dismissed Bloomberg as an ambitious billionaire. Voters wanted leaders who attacked Wall Street, critics asserted, not someone who made a fortune there. Others warned that Bloomberg, a New Yorker, could not appeal to voters in the heartland. These arguments received considerable attention in the national media, but they do not hold under scrutiny.

There are good reasons for the late filing. Bloomberg hinted months ago that he would not consider a run unless moderates, especially Joe Biden, slipped. Biden has been losing ground to Elizabeth Warren in the early primary states of Iowa and New Hampshire. Perhaps Bloomberg worried about recent polls that indicate Warren and other Democratic candidates might struggle against Trump in the general election. A New York Times Upshot/Siena College poll shows that Trump is running close to or ahead of current leaders in the Democratic field in six states that may decide the 2020 presidential election. Time is running out for Bloomberg or other potential candidates. Many Democratic strategists think additional choices could prove helpful.

They recognize that the party’s four current leaders, Joe Biden, Elizabeth Warren, Bernie Sanders, and Pete Buttigieg bring distinct skills, yet each has vulnerabilities. Biden is likeable and experienced but seems unsteady in the debates. Warren offers well-researched plans for reform, but some voters think her proposals are too costly, and polls indicate she is behind Trump in most tossup states. Sanders impresses numerous followers with strong challenges to inequality, but some characterize him as a cranky socialist. Buttigieg is a brilliant communicator, but some think he is too young and inexperienced to be elected president in 2020.

David Axelrod, formerly a key adviser to Barack Obama, summed up the worries. Axelrod pointed to “nervousness about Warren as a general election candidate, nervousness about Biden as a primary candidate . . . and fundamental nervousness about Trump and somehow the party will blow the race.” The major reason some Democrats welcome an entry from Bloomberg is that no other Democrat presently appears comfortably positioned to defeat Donald Trump.

Like all the top Democratic contenders, Michael Bloomberg brings strengths and vulnerabilities. He was very effective as three-term mayor of New York City. Historian David Greenberg noted in the New York Times that under Bloomberg, “Crime plummeted, schools improved, racial tensions eased, the arts flourished, tourism boomed, and city coffers swelled.” There were controversies, of course, especially over “stop and frisk” anti-crime measures that disproportionately affected black and brown citizens. Bloomberg will need to address this important issue if he campaigns for president. African Americans and Hispanics want just treatment, and they have a substantial presence in the party. Other criticisms focus on Bloomberg’s personal characteristics rather than issues related to his terms as mayor. Some say Bloomberg is too old or too short or that Americans are not ready for a Jewish president.

A more frequently articulated criticism is that voters do not want to see another rich man in the White House. Bernie Sanders warned, “Sorry, you ain’t going to buy this election.” A billionaire like Bloomberg cannot be counted on “to end the grotesque level of income and wealth inequality which exists in America today,” argued Sanders. Critics that echo Sanders’s attack, complain that Democrats have given too much power over the years to wealthy candidates, officials, and benefactors.

Michael Bloomberg is, indeed, one of the wealthiest Americans, but it is worth noting that several of America’s best presidents also ranked among the country’s richest. George Washington and Thomas Jefferson possessed fortunes in land and slaves. Theodore Roosevelt and John F. Kennedy benefited from the success of wealthy, business-oriented fathers. Franklin D. Roosevelt, born of the manor, probably did more for America’s unemployed and poor than any other president.

Self-made achievement in business and the professions does not guarantee success in politics. Herbert Hoover, an orphan at age 10, achieved multi-millionaire status as an mining engineer but fared poorly at the White House. Donald Trump claims to be a high-achieving billionaire, yet scholars rate him the worst or one of worst presidents.

We cannot judge Michael Bloomberg’s potential for effective presidential leadership in terms of his record in business. Nevertheless, a Bloomberg candidacy provides distinct opportunities for Democrats. Michael Bloomberg could become a Democratic asset if the U.S. economy continues humming along in 2020. Studies reveal that economic growth and low unemployment frequently benefit an incumbent in presidential races. Trump says his policies ignited a business boom. The claim is incorrect. Markets tumbled when Trump weaponized trade wars and threatened to shut down the government. Current Democratic candidates have not been persuasive when responding to Trump’s bogus claims about brilliant economic management.

More effectively than any other Democrat currently in the presidential lineup, Michael Bloomberg can counter Trump’s boasts about business acumen by demonstrating greater expertise in financial affairs. Unlike Donald Trump, who received a $60.7 million loan from his father to launch a business career, Michael Bloomberg started without a strong initial boost. Through brilliant planning and investing, Bloomberg emerged as the fourteenth richest person in the world, according to Forbes. Also, after three terms as mayor, he left New York City’s finances in excellent shape. After retiring from city politics, he committed much of his money to progressive causes. Bloomberg funded global health programs and supported political candidates that challenged the National Rifle Association, protected the environment, and worked to limit climate change. Bloomberg also took the Giving Pledge. Nearly all his net worth will be given away in the years ahead or left to his philanthropic foundation.

Bloomberg’s critics are focusing on irrelevant matters when denouncing his candidacy. It is not particularly important that Bloomberg is a senior citizen or a diminutive New Yorker or that he entered the primary race long after other candidates began campaigning. Nor are facts about Bloomberg’s enormous wealth likely to turn off millions of voters (the image of business success benefited Trump in 2016).

Economist and columnist Paul Krugman, usually insightful, recently joined the chorus of complaints about irrelevant matters. He mocked the idea “that America is just waiting for a billionaire businessman to save the day by riding in on a white horse.” But whether a rescuer is rich or middle class is not especially important. The significant question for Democrats is: who will be available to the party if polls reveal in 2020 that Donald Trump is competitive or dominant in battleground states against leading Democratic contenders? If the 2020 surveys indicate that America and the world are in danger of experiencing four more years of deeply flawed presidential leadership, Michael Bloomberg’s candidacy may look promising.