John P. Enyeart is Professor of History at Bucknell University. He is author of Death to Fascism:  Louis Adamic’s Fight for Democracy, an examination of the once famous now forgotten journalist and antifascist political activist Louis Adamic. It was released July 1 by the University of Illinois Press. Enyeart also wrote The Quest for “Just and Pure Law”:  Rocky Mountain Workers and American Social Democracy, 1870-1924. 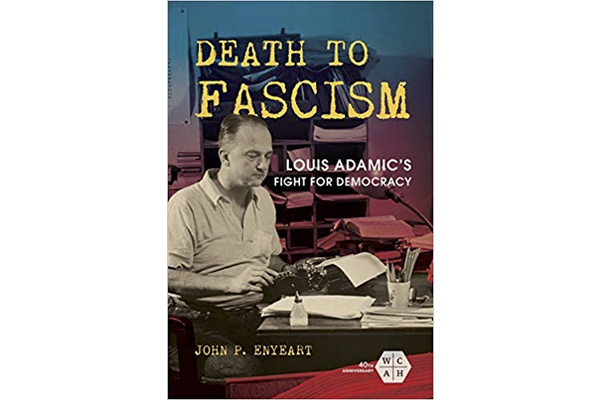 From the 1930s through the 1950s, Louis Adamic was one of the best known journalists and immigrant rights activists in the United States. His editorials and columns championing immigrant and African American rights, workplace justice, and anti-colonialism appeared in the New York Times, The Nation, Harper’s Weekly, and the Saturday Evening Post. His advocacy of ethnic equality changed middle school, high school, and college curricula by encouraging teachers to recognize cultural differences as an asset for students to discuss not an obstacle to be overcome. Eleanor Roosevelt praised his efforts to fight nativist and racist policies in her syndicated newspaper column, My Day. In fact, her appreciation for his work resulted in Adamic and his wife being invited to dinner at the White House.

During World War II Adamic’s writings, speeches, and radio interviews about politics in his native Yugoslav helped convince Americans to support communist guerrilla fighter Josip Broz Tito’s Partisan fighters there. However, Adamic’s support of Tito led Federal Bureau of Investigation agents to surveil him until his death in 1951 because they labeled anyone who praised a Communist as a subversive. Simultaneously, Americans’ growing admiration for the Partisans convinced the Treasury Department to make Adamic one of its leading spokespeople for selling war bonds.

Adamic’s nuanced positions have been forgotten today because the binary nature of anticommunism in the mid-twentieth century made his progressive politics incomprehensible to a majority of Americans. Adamic urged Americans to embrace pluralism. The US, he argued, was not an Anglo Protestant nation, but a land of migrants and refugees continuously redefining themselves. Adamic called for a global embrace of pluralism. He pointed to Tito’s promise to his Serb, Slovene, Croat, Montenegrin, Bosnian Muslim, and Macedonian soldiers that victory over their Axis occupiers would result in a Yugoslavia based on ethnic equality. Adamic continued to support Tito after the Yugoslav leader broke from the Soviets in 1948. He hoped that  the new Yugoslavia’s pluralist roots would ultimately lead Communist Yugoslavia to evolve into a true democratic republic. He believed both the Soviets and Western powers were imperialists and he predicted, correctly, that Yugoslavia would join with colonial nations to champion a world where countries did not have to choose an alliance with either the US and USSR. During the early Cold War period Adamic’s thinking presented such a conundrum to the FBI, the agency created a special category of subversive for him, “a pro-Tito Communist.” At the same time the US poured millions of dollars into Yugoslavia hoping to exploit divisions between the Soviets and Tito.

As my research shows, most scholars have failed to grasp Adamic’s politics. He called himself a progressive which for him meant supporting racial and ethnic equality, workers’ rights, and a foreign policy that granted nations the right to self-determination. He criticized both liberals and Communists as unreliable. Liberals, he charged were “too wishy washy” and Communists always followed the dictates of Moscow. He wanted to advance a globally conscious anti-colonial left. His views threatened the emerging Cold War consensus, and anticommunists of all stripes purposefully mischaracterized his positions in order to silence him. Anticommunist activists feared that the growing anti-colonial sentiment he and African American activists, non-Communist labor leftists, and peace activists advocated would challenge the growing contingent of Cold War liberals.

Adamic’s quest to convince Americans to find an alternative to a Cold War ended on September 4, 1951. His local coroner ruled his death a suicide despite the fact that New Jersey State Police detectives suspected foul play. Prior to his death, Adamic had been moving from hotel to hotel in New York City while he worked on his thirteenth book, an account of his 1949 visit to Tito’s Yugoslavia. He went into hiding because he believed that former Croatian fascist soldiers (Ustaše), who came to the US as Displaced Persons, would follow through on their threats to kill him. The Nazis allowed the Ustaše, under the leadership Ante Pavelić, to set up the Indepndent State of Croatia during World War II. Living in exile in Argentina after the war, Pavelićordered assassins still loyal to his vision of Croatian nationalism to kill his enemies all over the world. According to interviews conducted by both FBI agents and journalists of Adamic’s friends and associates, Adamic believed they wanted to kill him for his role in convincing the American public to support Tito during World War II. The FBI agents who monitored Adamic noted that although a Soviet agent also threatened him, he only feared the Croatian fascists. By early September, he thought the danger had passed. He was clearly wrong.

Adamic’s anticommunist critics used his death to portray him as an agent of Stalin who broke with the Kremlin by supporting Tito and suffered death as a consequence. Smearing Adamic as a Communist made him toxic. Teachers and college professors stopped assigning his books, and he and his progressive politics, rooted in his opposition to fascism, faded into obscurity.

Death to Fascism demonstrates that the reemergence of progressive politics today, and its links to antifascism, has a long history. For Adamic, fascism, at its root, was an ethos uniting disparate strands of conservative and reactionary thinking into an anti-Enlightenment counterrevolution that sought to destroy democracy by appealing to beliefs in racial superiority and glorifying violence. For democracy to truly be fascism’s antithesis, those claiming to fight for democracy then and now need to commit to his progressive agenda of racial and ethnic equality, workers’ rights, and the rights of nations to self-determination.