Panama celebrates its black Christ, part of protest against colonialism and slavery

Panama celebrates its black Christ, part of protest against colonialism and slavery 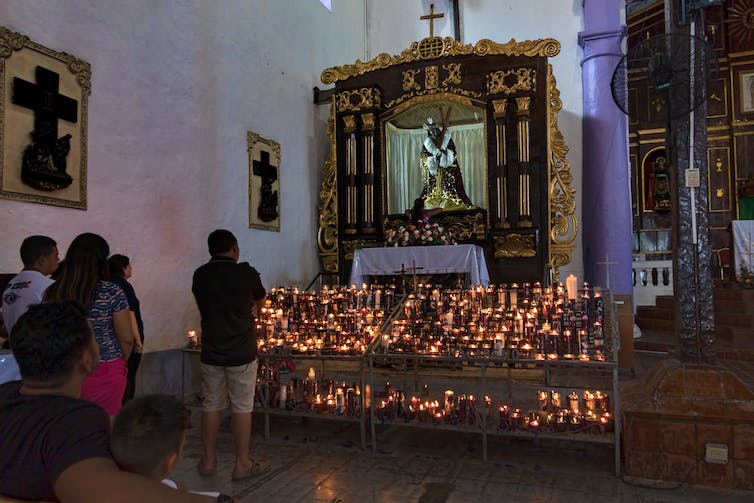 Panama’s “Festival del Cristo Negro,” the festival of the “Black Christ,” is an important religious holiday for local Catholics. It honors a dark, life-sized wooden statue of Jesus, “Cristo Negro” – also known as “El Nazaraeno,” or “The Nazarene.”

Throughout the year, pilgrims come to pay homage to this statue of Christ carrying a cross, in its permanent home in Iglesia de San Felipe, a Roman Catholic parish church located in Portobelo, a city along the Caribbean coast of Panama.

But it is on Oct. 21 each year that the major celebration takes place. As many as 60,000 pilgrims from Portobelo and beyond travel for the festival, in which 80 men with shaved heads carry the black Christ statue on a large float through the streets of the city.

The men use a common Spanish style for solemn parades – three steps forward and two steps backward – as they move through the city streets. The night continues with music, drinking and dancing.

In my research on the relationship between Christianity, colonialism and racism, I have discovered that such festivals play a crucial role for historically oppressed peoples.

To Portobelo’s inhabitants, especially those who claim African descent, the festival is more than a religious celebration. It is a form of protest against Spanish colonialism, which brought with it slavery and racism.

History of the statute

Portobelo’s black Christ statue is a fascinating artifact of Panama’s colonial history. While there is little certainty as to its origin, many scholars believe the statue arrived in Portobelo in the 17th century – a time when the Spanish dominated Central America and brought in enslaved people from Africa. 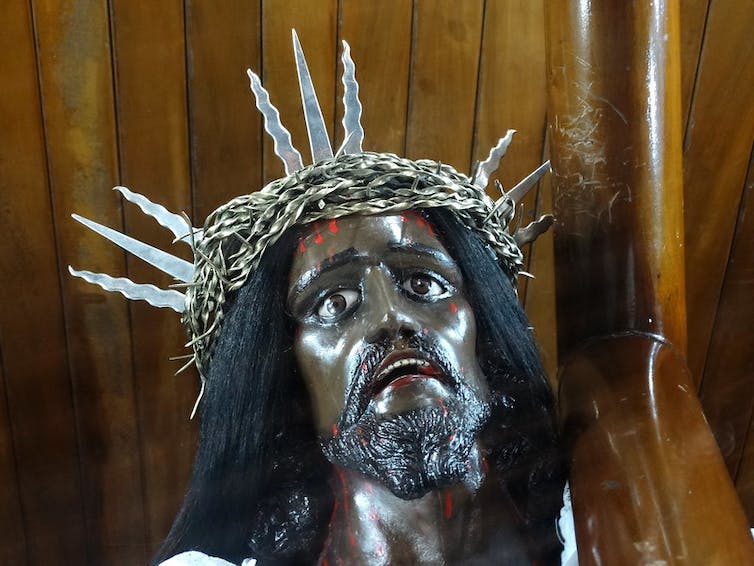 Various legends circulate in Panama as to how the black Christ got to Portobelo. Some maintain that the statue originated in Spain, others that it was locally made, or that it washed ashore miraculously.

One of the most common stories maintains that a storm forced a ship from Spain, which was delivering the statue to another city, to dock in Portobelo. Every time the ship attempted to leave, the storms would return.

Eventually, the story goes, the statue was thrown overboard. The ship was then able to depart with clear skies. Later, local fishermen recovered the statue from the sea.

The statue was placed in its current home, Iglesia de San Felipe, in the early 19th century.

Stories of miracles added to its mystique. Among the legends in circulation is one about how prayers to the black Christ spared the city from a plague ravaging the region in the 18th century.

Since its exact origins are unknown, so are the artistic intention behind the Jesus statue. However the figure’s blackness has made it an object of particular devotion for locals of African descent.

At the time of the arrival of Cristo Negro, the majority of the Portobelo’s population was of African descent. This cultural heritage is significant to the city’s identity and traditions.

The veneration of the statue represents one of many ways that the black residents of Portobelo and the surrounding Colón region of Panama have engendered a sense of resistance to racism and slavery.

Each year around the time of Lent, local men and women across Colón – where slavery was particularly widespread – dramatize the story of self-liberated black slaves known as the Cimarrones. This reenactment is one of a series of celebrations, or “carnivals,” observed around the time of Lent by those who identify with the cultural tradition known colloquially as “Congo.” The term Congo was originally used by the Spanish colonists for anyone of African descent. It is now is used for traditions that can be traced back to the Cimarrones.

During the carnival celebration, some local people dress up as the devil, meant to represent Spanish slave masters or complicit priests. Others don the dress of the Cimarrones.

Many of the participants in both the black Christ and carnival celebrations of Panama are Catholics as well. Together they participate to bring to light the Catholic Church’s complex relationship with Spanish colonization and slavery. Many Catholic leaders in the 16th to 18th centuries justified the enslavement of Africans and the colonization of the Americas, or at least did not object to it. 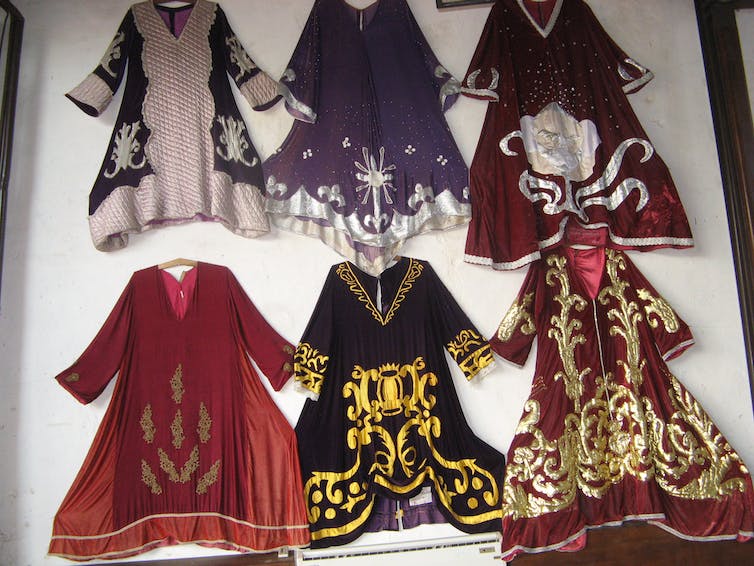 The different colored robes that are put on the statue of Cristo Negro. Ali EminovFlickr, CC BY-NC

Many people from throughout Panama have donated robes to clothe the statue. The colors of the robes donned by the statue varies throughout the year. Purple is reserved for the October celebrations, which likely reflects the use of purple in Catholic worship to signify suffering.

These robes draped on Panama’s black Christ are meant to represent those placed on Jesus when he was mockingly dressed in royal garb by the soldiers torturing him before his crucifixion.

Evoking this scene perhaps serves to remind the viewer of the deeper theological meaning of Jesus’s suffering as it is often understood in Christianity: Although Jesus is the Son of God prophesied to save God’s people from suffering and should thus be treated like royalty, he was tortured and executed as a common criminal. His suffering is understood to save people from their sins.

Some pilgrims specifically come during the October festival to seek forgiveness for any sinful actions. Some wear their own purple robes, the color indicating a sign of their suffering – and, of course, that of the black Christ.

[ Insight, in your inbox each day. You can get it with The Conversation’s email newsletter. ]