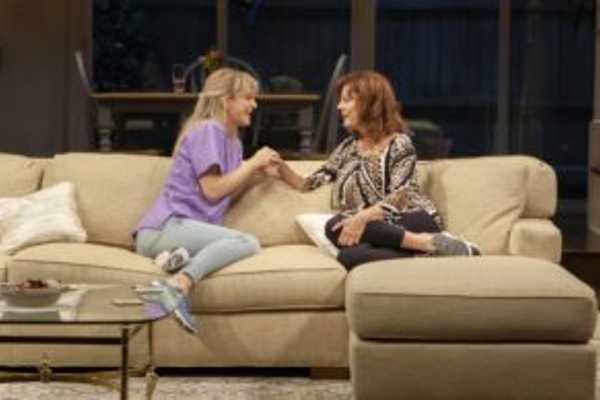 The musical South Pacific, the Richard Rodgers and Oscar Hammerstein show about life in the Pacific during World War II, debuted in 1949 and was a huge hit. Now, all these years later, Lorraine has been cast as Bloody Mary in South Pacific in a production of the show at her small town’s Jewish Community Center. She sees herself as a glowing celebrity in yet another starring vehicle in her local theater group. She is, as she constantly says, loved by all. The musical comes to represent her life, and the life she wishes she lived.

Lorraine’s mother is dying and receives 24 hour care from a former Serbian caregiver with problems galore, Ljuba. Lorraine has been in a hollow marriage for years with her husband, Bill, who rarely speaks to her and is absorbed daily in a book about the Civil War. Lorraine bristles that Bill has turned into an old man because all old men in America find that they must read a book about the Civil War before they pass on.

The travails of Lorraine are the material of Jesse Eisenberg’s very funny and very moving new play, Happy Talk, with a tremendous performance by Susan Sarandon as its star. The play opened Thursday at the Griffin Theater at the Pershing Square Signature Theater Complex on W. 42d Street, New York.

What do you get from a 1949 musical such as South Pacific? Everything, according to Lorraine. In the play, you continually hear the song Bali Hi, a song about hopes and dreams and a special place in a troubled world. That’s Lorraine’s world. She has built a self-centered, egomaniacal world for herself and refuses to recognize the odd and painful life in which she exists. She constantly goes back into the past, and to mythical Bali Hi, to try to re-discover herself, continually failing.

She never did have a good marriage and, of course, blames her husband, who can’t stand her. She and her mother never got along and for that she blames – mom. She never had friends and for that she blames all the people she says are her friends but will have nothing to do with her. As an example, after each rehearsal of the play all the actors go to a nearby bar to have a drink, but never ask Lorraine to join them.

Lorraine’s daughter, Jenny, whom she raised to be the same fantasy world chaser as her, arrives in mid-play and harangues her mother in long, hateful dialogues. Her chickens have not only come to roost, but to harass her.

She does have a wonderful relationship with Ljuba, the Serbian caregiver, who tells the audience a bit about the history of Serbia over the last few decades, Ljuba loves Lorraine, but for no apparent reason (you find out soon enough).

Ljuba has a time honored American historical problem involving immigration. She has been in the U.S. illegally for years and must find someone to marry her so she can stay. She’s willing to pay the going black market rate for arranged marriages, $30,000, and asks Lorraine to find her a hubby.

Lorraine recruits actor pal Ronny, who could be her lone friend, who agrees and is in it for the money and the money alone, even as he leads Ljuba to believe he likes her and that she could find happiness with him.

The road Ljuba and Ronny go down, urged on by the smiling and encouraging Lorraine is slippery slope and is the same road thousands of illegal immigrants have followed for a century in America. The marriage scam is an old one. The government permits many women, or men, from foreign lands to stay in America if they marry an American. Whole industries are involved in this. Men get off a plane and are married to a total stranger a few days later for a specified amount of money. Some women marry dozens of men, all at a fixed price.  It is a marriage mill that has been churning out legal couples who barely know each other for generations. When it starts in the play, numerous members of the audience nodded knowingly because the scam is so familiar to all.

The play is very, very funny and playwright Eisenberg takes the audience along on a comedic roller coaster with ups and downs and spins around dangerous curves. Then, later, there is a dramatic change in the story. His script is brilliant when it is funny and deep and provoking when it is dramatic.

Eisenberg’s work is smarty directed by Scott Elliot, who gets full use out of the music in South Pacific, particularly the song Bali Hi, using it as a backdrop to tell the story.

All of the actors do fine work. Ronny, the bubbling gay actor eager to collect his money, is played by the delightful Nicci Santos. Grumpy Bill, so enchanted by Lee, Grant and Gettysburg, is played well by Daniel Oreskes. Marin Ireland gives an enchanting and memorable performance as Ljuba.

The centerpiece of the show is Lorraine, played by Ms. Sarandon, The well-known screen actress (Bull Durham, Thelma and Louise, etc.), the star of so many movies, is just as comedic, and powerful, here on stage as she has been in any film. Her character takes both slow and sharp turns as the play progresses and Ms. Sarandon masters all of them. She is lovable and embraceable when she is funny and menacing when she is angry. She is hateful, and yet very vulnerable. She turns Lorraine into a memorable character, a pathetic middle-aged woman you will never forget.