Dr. Alon Ben-Meir is a professor of international relations at the Center for Global Affairs at NYU. He teaches courses on international negotiation and Middle Eastern studies. 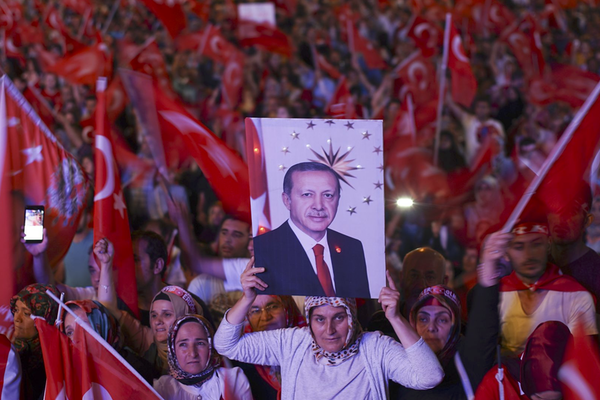 Over the past year, I had the opportunity to speak to many Turkish scholars and former government officials, the majority of whom left your country because they feared for their lives and their loved ones.

The one question that kept on surfacing is why a leader like you—who has achieved the pinnacle of power by undertaking the most significant social, political, and judiciary reforms, pursued economic development, and came close to establishing a model of Islamic democracy—reversed gears and abandoned your most impressive achievements?

From every angle I examined your behavior, I could not escape the conclusion that your reforms were nothing more than a vehicle by which you could solidify power to allow you to promote your political Islamic agenda. As far back as December 1997, you publicly equated Islam to a military crusade, citing a poem that states in part: “The mosques are our barracks, the domes our helmets, the minarets our bayonets, and the believers our soldiers.”

Your unruly ambition to become the leader of the Sunni Muslim world is the driving force behind your ceaseless efforts to implant a Turkish-oriented religious dogma in many countries in Europe and the Middle East.

You have invested hundreds of millions of dollars, building mosques and religious educational institutions and appointing Turkish Imams to promote your brand of Islam. MP Alparslan Kavaklıoğlu, a member of your AKP and head of the parliament’s Security and Intelligence Commission, echoed your skewed sentiment, stating last year that “Europe will be Muslim. We will be effective there, Allah willing. I am sure of that.”

In May 2018, you said that “Jerusalem is not just a city. [It] is a symbol, a test, a qiblah. If we can’t protect our first qiblah, we can’t be confident about the future of [our] last qiblah.” On a separate occasion, you told the crowd that the Muslim reconquest of Jerusalem would be “Soon, God willing.”

The EU countries have caught on to your alarming scheme; Chancellor Sebastian Kurz of Austria in June 2018 ordered the closing of seven mosques and scrutinized the right of dozens of Turkish imams to remain in the country, citing suspected violations of an Austrian law that bans “political Islam” or foreign financing of Muslim institutions.

You have shattered the dreams and aspirations of your fellow countrymen by denying them their inherent human rights, and dismantled every pillar of genuine democracy. You have sought and were granted constitutional amendments providing you near-absolute power, which you grossly abuse to realize your pipedream of becoming the new Atatürk of Turkey’s modern era.

You have subordinated the judiciary and the rule of law to your whims, ensuring that courts pass judgments consistent with your own position on any alleged offenses, all in the name of social piety, national security, and solidarity.

You have orchestrated a military coup that was planned to fail, calling it “a gift from God” that permits you to chase your enemies with vengeance. You accuse your arch enemy Fetullah Gülen of being behind it, but have produced no credible evidence to support your charges.

You have imprisoned over 17,000 women with their children, wreaking havoc on a multitude of innocent civilians. You have hunted Turkish nationals whom you accuse of being affiliated with the Gülen movement and pressure many countries to expel such nationals.

Fearing public accountability, you have targeted the press and labeled it as the enemy of the people. You have closed scores of media outlets, and imprisoned and tortured more than 200 journalists.

In today’s Turkey, freedom of the press is a thing from the past, as just about all existing licensed media outlets must dance to your tune and strongly support your political agenda to stay in business. In the same vein, you are prohibiting the right to assembly while stifling the academic community and think tanks, who are the forces of social, political, and economic advancement.

Your Kurdishphobia seems to blind you. You have been fighting the PKK and accusing them of being terrorists, when in fact they represent the cause of their fellow Turkish Kurds. At least 40,000 have been killed on both sides over the past 50 years, and there is no end in sight as you vow to kill every last one standing, which is completely delusional.

The PKK are freedom fighters fighting on behalf of their Kurdish community, who simply want to maintain their cultural heritage, keep their language alive, enjoy their folk music and dance, and have their basic human rights respected.

Instead, you abruptly ended the peace negotiations in July 2017 and continue to persecute them indiscriminately, inflicting unbearable pain and suffering on your own fellow citizens yet demanding absolute loyalty.

You have and continue to sternly object to the establishment of Kurdish autonomous rule in Syria, fearing that your own Kurdish community would follow suit. Under the pretext of fighting ISIS, you invaded Syria in order to actually wage merciless war against the Syrian Kurdish militia—the YPG—whom you falsely accused of being a terrorist organization allied with the PKK. On the top of your agenda in Syria, however, is the eventual establishment of a permanent presence there.

You betrayed your alliance with the US-led coalition to fight ISIS by providing ISIS with logistical support, allowing volunteers to cross the border to join their ranks in Syria and Iraq, and trading oil for weapons, all while turning a blind eye to their reign of terror and unspeakable atrocities.

You pretend to be a Western ally, but you cozy up to Russia’s Putin—the West’s staunchest enemy. You remain determined to purchase Russia’s S-400 air defense system, in defiance of the US and NATO. As a NATO member, you have violated every clause of the charter by committing horrifying human rights abuses at home and destroying every tenet of democracy.

You are creating alliances with Islamic states and organizations, and drawing to your orbit countries with predominantly Muslim populations, including the Balkan countries, by investing in their infrastructure and providing them with military equipment and training.

Your policy of “zero problems with neighbors” has failed; instead Turkey has problems with just about every neighboring state, including Syria, Iraq, Greece, Cyprus, and Armenia. Many world leaders know you are a conniving, power-thirsty dictator, but deal with you out of necessity only because of Turkey’s geostrategic importance as a bridge between East and West and a hub of oil and gas.

You have no shame about dispatching your thugs to foreign countries to do your bidding. Among many other egregious incidents, 15 members of your security detail physically attacked protestors outside the Turkish Embassy in Washington, DC in 2017. In 2016, your security team fought with Kurdish protestors in Ecuador. In 2015, your bodyguards scuffled repeatedly with Belgian police, and in 2011 they fought UN security personnel.

You are antisemitic to the core. Among many of your antisemitic statements, at a recent meeting of the Turkey Youth Foundation in Istanbul, you stated that “the Jews in Israel kick men, but also women and children, when they’re on the ground.” You also told the audience, “Don’t be like the Jews.”

More than 100 years have passed since the genocide of over one million Armenians by Ottoman soldiers in the wake of World War I. Even though history books have fully documented, and the international community recognizes, this horrifying event, you still haven’t mustered the courage to admit it.

In fact, you vehemently criticize any country and condemn any individual that attributes the genocide to the Ottomans. Although it was the Ottomans and not the present Republic of Turkey that committed these atrocities, you do not want to malign the Ottomans as you have made no secret of your ambition to revive the power and influence of the Ottoman Empire under your leadership.

The sad thing, Mr. Erdogan, is that we are living now in the 21st century; the days of conquest and undue influence over the fate of other countries are over. You had a historic opportunity to become a respected, benevolent leader, loved by your countrymen and admired by world leaders. But you have squandered it all because of your desire to become the new Sultan of a would-be empire that exists only in your wretched imagination.

You, like any other mortal, will be gone. Perhaps it is a good time for you to reflect and ask yourself, what am I leaving behind?

In your wake, Mr. Erdogan, you leave a shattered Turkish people, yearning to be free, free to think and believe, free to assemble, free to criticize, free to use their ingenuity and resourcefulness to create a free society.

But you have sacrificed the welfare for the Turkish people for blind personal ambition, for which you will be remembered.