When We Murdered Birds to Make Hats 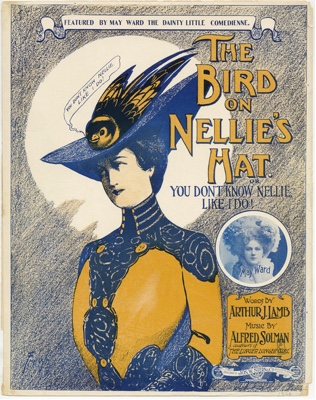 This year is the 100th anniversary of the passage of the landmark Migratory Bird Act, passed by Congress to prevent the killing and mutilation of millions of birds in order to create feather accentuated women’s wear that was eagerly purchased by the wealthy. To celebrate the act, and the liberation of all those birds, the New-York Historical Society has opened “Feathers: Fashion and the Fight for Wildlife,” an intriguing and thought-provoking exhibit that chronicles the murder of so many birds to create a huge feather industry in the 1880 to 1918 period, and its end.

In the impressive exhibit are dozens of feather accentuated garments that so many women craved in the 1880 to 1918 period, such as luxurious full-length gowns with swan feathers, hats with large, colorful feathers, gorgeous ladies’ fans made of feathers, hats with died ostrich feathers, feather boas and even women’s’ hand muffs made out of the bodies of two herrings (sea gulls) with their heads showing. The exhibit even has as striking piece of sheet music for the popular song “The Bird on Nellie’s Hat.”

According to Dr. Louise Mirrer, president and CEO of the New-York Historical Society, the exhibit delves "into and examines the economic and social circumstances that inspired the early environmentalists and activists who lobbied for this consequential legislation…. the exhibit also investigates how the act impacted the [New York] city’s feather importers, hat manufacturers, retailers, and fashion consumers – as well as how New York women played an important role in pushing for the legislation.”

Among those fierce activists were Olive Miller, Florence Bailey, Mary Sage, Mabel Wright and George Bird Grinnell. Another was Lilli Lehmann, a singer and activist who garnered much publicity to the issue as a member of the Metropolitan Opera. Most of them came to be activists when appalled at the fashion world around them. Bailey is an example. As a first-year student at Smith College in 1896, she was aghast at the exuberance with which her fellow students wore feathery clothing. She castigated them, wrote an article about the protection of birds and eventually founded a chapter of the Audubon Society. These women, and thousands of others, fought hard for thirty years to end the mutilation of birds for the pleasure of wealthy women who luxuriated in their lovely feather fans and snappy hats.

They received much help from numerous organizations and even from the men and women who propelled the feather industry, too, such as hundreds of members of the Millinery Merchants Protection Association, who got the industry to stop using migratory bird feathers in 1904. Others forced the fashion industry to stop using feathers from the egrets and manufacture fake egret feathers instead. Others led boycotts of feather adorned clothing.

Their efforts paid off with some minor protective laws and then, in 1918, with the powerful Migratory Bird Act, which protected birds found flying from Canada to America, and, in effect, millions more in America itself. Feathers did not completely disappear from the fashion industry, but starting in the 1930s, their appearance was significantly diminished.

Fourteen bird paintings by renown wildlife artist John James Audubon, including the heralded Great Swan and gorgeous Roseate Spoonbill, adorn the walls of one gallery in the exhibit and add to its enjoyment. Each is accompanied by a comprehensive description of the bird, along with harrowing details, such as that in 1902 alone over 200,000 Great Egrets were slaughtered in order to provide 1.5 tons of feathers for women’s apparel. On the happy side, you learn that the Common Eider bird shed its down to make a nest for its babies and then warmed them with its tummy. On the X-rated side, you learn that the lovable Mallard, shown in all of its beauty in so many paintings over the years, was a sex maniac who hooked up with just about bird he could find.

One of the delightful highlights of the exhibit is the collection of bird songs (from the Macauley Library at Cornell University). You can pick up a listening device anywhere in the exhibit and listen in as various birds chatter to each other. The beauty of it is that it reminds you of all the times you listen to birds yourself. As you walk to or from the museum along Central Park West, you can hear the birds chatter in the park and it gives a whole new dimension to the exhibit.

The exhibit could use more liveliness, such as a collection of trees with chirping artificial birds in them. There should have been an explanation too, that the “need” for birds in women’s clothing was tied into the material extravagances of the Gilded Age that took place during the era of feather mania. There needed to be some explanation, too, that while the Migratory Bird Act of 1918 saved the lives of millions of birds over the years, it did nothing to protect other animals who became part of the clothing universe. When I was a kid, I remember some of my mother’s friends wearing fox stoles with the fox’s head and claws in them. Remember all of those mink coats? Cashmere sweaters? Vicuna coats (42 South American vicunas are shorn for a single coat)?

Overall, though, the exhibit is a nice look at wildlife history. When you walk out of the exhibit, too, you’ll know that, thanks to all of those activists 100 years ago, all those birds whose chirping you hear every day will still be there tomorrow.

The New York Historical Society is located at W. 77th Street and Central Park West in New York. The exhibit will continue until July 15.