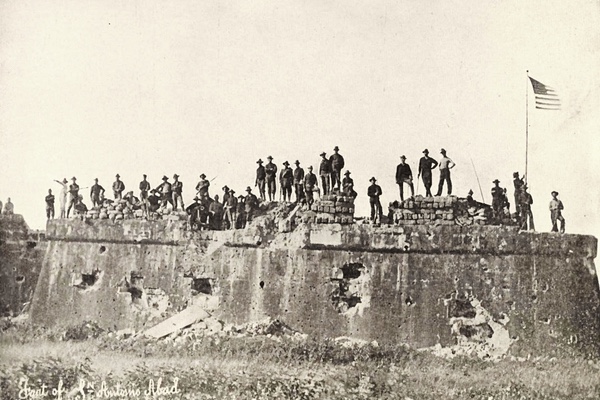 The remarks by President Donald Trump on American strategy in Afghanistan have evoked considerable commentary and even praise from some pundits for maintaining a military presence in South Asia even if the long term goals of that commitment remain rather murky. Another Trump comment in response to the recent terrorist attacks in Barcelona have received far less attention and this silence may speak volumes about how a naïve belief in American innocence and exceptionalism prevents Americans from understanding the world and why we are often perceived in such negative terms.

Following the Barcelona attacks apparently orchestrated by the Islamic State, President Trump tweeted a false historical account of how General John J. Pershing dealt with Islamic terrorists in the Philippines. According to the discredited web account that Trump employed in his 2016 Presidential campaign and then tweeted in response to Barcelona, Pershing captured fifty Islamic terrorists and then ordered the execution of forty-nine prisoners with bullets dipped in pig’s blood, assuring that the bodies of those executed were desecrated by this action in violation of their faith. The fiftieth captive was released to inform his co-religionists of how sternly the Americans were prepared to deal with terrorism, and Trump concluded with the observation that after this show of force, Americans experienced no further acts of terrorism for at least the next quarter century. Many news outlets were quick to point out the false nature of the story long discounted by historians.

Nevertheless, there was little outcry over the fact that whether true or false, the President of the United States had embraced the cold-blooded murder of captives and the desecration of their religious beliefs. In addition, no one seemed to inquire as to why American troops were in the Philippines. The assumption always seems to be that innocent Americans were simply minding their own business when they were brutally attacked. This assumption of innocence fails to take any notice of the Spanish-American War in which the United States acquired the Philippines. Opposition to the annexation of the Philippines by the United States resulted in the Philippine-American War and subsequent Moro Rebellion in which resistance to American annexation was brutally crushed. Americans have ignored this troubling history and, instead, prefer to concentrate upon World War II when Americans and Filipinos fought together at Bataan in opposition to the Japanese invasion of the islands followed by the post-World War II independence granted the Philippines. While Philippine President Rodrigo Duterte has received considerable international censure for ignoring legal due process and allegedly indiscriminately murdering accused drug dealers, his harsh comments toward the United States and both Presidents Obama and Trump indicate that Duterte is well aware of this troubled history between the United States and the Philippines, even if President Trump and most Americans seem clueless about the past.

In the Spanish-American War of 1898, Admiral George Dewey surprised and defeated a Spanish fleet in Manila Bay. Spain had colonized and ruled the Philippines for over 300 years, but in the 1898 Treaty of Paris, Spain ceded its colonies of Guam, Puerto Rico, and the Philippines to the United States, while Cuba was granted independence under a virtual American protectorate. The Filipino people under the leadership of Emilio Aguinaldo rebelled against the Spanish colonizers and established the Philippine Republic.

The Americans were initially greeted as liberators, but when Congress voted to annex the Philippines rather than recognize independence, Aguinaldo and his people felt betrayed. Racial arguments were presented in Congress that the inferior Filipino people were simply not sufficiently advanced to take over management of their own affairs, and, of course, annexation would provide greater access to lucrative Asian markets for American business interests. In response to the American annexation without the consent of the Filipino people, President Aguinaldo led an armed resistance which was ruthlessly crushed by an American military occupation that employed torture tactics such as waterboarding, forced the civilian population into concentration camps, destroyed crops and villages in order to deny rebels a food supply, and implemented search-and-destroy missions that found it difficult to distinguish between peaceful villagers and rebel soldiers.

The American tactics in the Philippines from 1899 to 1902 were similar to those used during the Vietnam War that did so much damage to the environment and people of Southeast Asia as well as tearing apart the fabric of American society and inflicting significant casualties upon American troops dispatched to the region. Also similar to the Vietnam War, critics of the Philippine-American War, such as Mark Twain, denounced the United States for abandoning democratic principles in pursuit of an imperialist war of aggression against indigenous people fighting for their independence. Presidents William McKinley and Theodore Roosevelt, however, embraced annexation and imperialism, leading to the capture of Aguinaldo and suppression of the insurrection. In the Philippine-American War (1899-1902), 4,234 American troops were killed while another 2,818 wounded. Filipino deaths as a result of the conflict are estimated to exceed a quarter of a million people.

In this bloody conflict, 120,000 American troops were employed to subdue the predominantly Catholic population of the northern Philippines, while the United States essentially ignored the largely Muslim population in the southern islands, including Mindanao and the Sulu Archipelago. A treaty between the Americans and Moros in the south was initially negotiated under the auspices of the Ottoman Empire. Following the conquest of the northern islands, however, the United States abrogated the treaty and attempted to assert direct control over the south, precipitating the Moro Rebellion and a new conflict. A clash of civilizations was evoked by policymakers who emphasized the fanatical religious ideas as well as racial inferiority of the Moro people. In fact, the Moros were primarily fighting for religious freedom and against new taxes imposed by the American government.

The American military implemented the same harsh tactics used earlier against northern insurgents. In the January 1906 Battle of Bud Dajo, thirty-three American soldiers died while approximately 600 Moro men, women, and children were slaughtered. In June 1912, General Pershing broke the Moro resistance at the Battle of Bud Baysak in which over 500 Moro fighters as well as their families perished. While there is no evidence for the rumor that Pershing executed prisoners with bullets soaked in pig’s blood, he did ruthlessly end the Moro Rebellion. The legacy of this conquest, however, is that the Moros continue to resist the national government in Manila, and the Islamic State has found some support in the region. The government of the Philippines has accepted assistance from the United States in battling this expansion of the Islamic State, but President Duterte does not want to get too close to the United States with its history of military intervention in the Philippines while he seems to be engineering a strategic shift toward better relations with the People’s Republic of China.

In his tweet regarding terrorism and General Pershing in the Philippines, President Trump demonstrated his ignorance of history, but he also exhibited the ability to employ images of American innocence to manipulate the public with fear in order to justify the expansion of his power to fight terrorists with travel bans, border walls, and an increased military presence. The Americans and other tourists strolling along a beautiful Spanish boulevard were innocent victims, but American history is complex with a tradition of military intervention that is hardly benign. The Filipinos, whether Catholics or Muslims, resisting the military occupation of their nation were hardly terrorists who wanted to kill innocent American citizens. Instead, they were freedom fighters struggling to establish political independence against a colonial power.

Americans need to be vigilant about the manipulation of history that distorts American innocence and embraces the execution of prisoners and desecration of religion, while playing upon fears and ignorance. The world is a dangerous place, and the Islamic State a real threat, but false claims of American innocence and employing fear to justify the brutal expansion of state power will not make us safer. A failure to understand American history such as the Philippine-American War makes the nation vulnerable to demagogues who prey upon fear and ignorance.