From Rubble to Riches: The World's Fair That Raised San Francisco From the Ashes 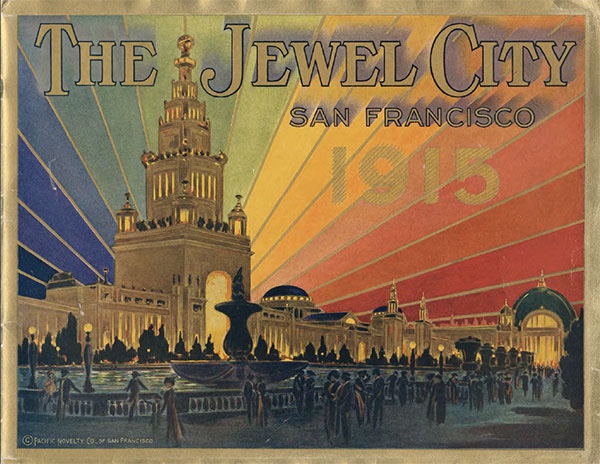 When the Panama-Pacific International Exposition opened in 1915, San Francisco looked fabulous: Bedecked with ornate, European-inspired architecture and an array of technological wizardry, the city resumed its role as a West Coast powerhouse less than a decade after near-total destruction. Block after block of property flattened by the 1906 earthquake and ensuing fires had been transformed to make way for glitzy new hotels, sturdy apartment buildings, landscaped parks and courtyards, offices, theaters, and a sparkling, gold-topped City Hall. New streetcar lines were built to carry visitors and locals to the fair, much of which rose on previously uninhabitable lots along the city’s northern waterfront. The Panama-Pacific International Exposition showed the world that the city had reached new heights of grandeur, launching the modern incarnation of San Francisco like a phoenix from the ashes.

The concept of a world’s fair wasn’t new to San Francisco, as several exhibitions had been proposed during the late 19th century. In 1894, the city hosted the California Midwinter Exposition, which brought many of exhibits from the Chicago Columbian Exposition to the West Coast. Then in 1909, a few years after the city’s devastating earthquake, the Portolá Festival provided the community its first opportunity to show that San Francisco was getting back on her feet. But the Panama-Pacific International Exposition (PPIE) of 1915, an idea that had been forming since the 1890s, finally put a global spotlight on the city, as it celebrated the Panama Canal’s completion and its impact on travel and trade throughout the Western Hemisphere.

“San Francisco was just 9 years out from the earthquake and fire, so the incredible rebuilding effort mirrored the tremendous feat of engineering that the canal required,” says curator Erin Garcia, who organized the “City Rising” exhibition for the California Historical Society. “There was also this symbolic, historical connection for many people who came to San Francisco in the middle of the 19th century during the Gold Rush from the East Coast and from Europe, sailing around Cape Horn or traveling overland via the Isthmus of Panama. The opening of the Panama Canal obviously made this journey much simpler, reinstating San Francisco as the West Coast’s port of call and the new center for commerce in the Pacific, particularly with Europe and Asia.”

After almost 80 percent of the city was leveled following the 1906 quake, city leaders realized that a global exposition would help incentivize rebuilding and give the community a tangible goal for recovery. “Images of the city destroyed were so powerful, and this is what people elsewhere thought of San Francisco,” says Laura Ackley, whose new book, “San Francisco’s Jewel City: The Panama-Pacific International Exposition of 1915” is the first modern, comprehensive volume to cover the 1915 world’s fair. “Not only would continuing with plans for the fair replace San Francisco’s damaged image in the eyes of the world, it could also be a lynchpin around which the people of the city and region could rally.”

Before San Francisco could plan its fair around the opening of the Panama Canal, the city had to win popular support over other municipalities, particularly New Orleans and San Diego. The Portolá Festival helped prove that the city was ready for an influx of guests, and since the bulk of California’s population resided in the northern portion of the state, San Diego was easily bested. (San Diego was eventually provided state funds to produce the much-smaller but similarly titled Panama-California Exposition, which also debuted in 1915 and offered visitors enticement to see more of the Golden State.) New Orleans took the fight to Congress in 1911, but San Francisco’s fundraising powers and the support of President Taft helped the city by the bay win federal approval. ...